A lot of comics to read this week, and I’m not complaining. Though not everything was as awesome as I had hoped, I’m still very pleased. Teen Titans Rebirth should have been the last comic out but Super Sons and Justice League of America were delayed until 2017. But I’ve reached my goal of reading every single issue under the Rebirth relaunch.

With mostly positive reviews and stellar sales, I think we can safely call Rebirth a success. There are so many good books out right now that I’m struggling to figure out which I should drop. I’ll eventually write up an article on my overall thoughts. 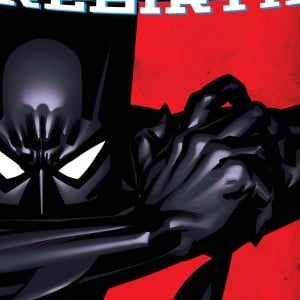 Terry McGinnis is back as Batman and Tim Drake taking up the mantle is just a forgotten memory. If you missed any of the recent Batman Beyond stories then don’t bother to catch up, because this Rebirth issue completely ignores it. We get a quick introduction to Terry and a brief origin story, but then the action picks up. The Jokerz are wrecking havoc and all signs point to Joker having returned.

I’m not going to lie, the last Beyond series got bad, like really bad. Which is why I don’t feel bad about Tim Drake’s run being wiped out. Once this issue got past the introduction, it made me forget all about Dan Jurgens past struggles with the character. It felt like reading a sequel to the Batman Beyond animated Joker movie. I’m hesitant to get my hopes up again but the story and art were great. So far, so good.

I love me some Batman, anime, and Godzilla. So when DC Comics announced a kaiju crossover story featuring members of the Batfamily I got pretty excited. My expectations went through the roof when they then announced Steve Orlando’s involvement, the writer behind the amazing “Midnighter” series. Unfortunately, The Monster Men has been a bit of a letdown, mostly because the story doesn’t seem to be going anywhere. Batman and Batwoman did wheelies off of a multi-faced monster, while Gotham Girl continued to freak out as she ripped a creature to shreds. That actually sounds cool typing it out but I assure you, it could have been better. Everyone else did nothing except for Nightwing, who along with Gotham Girl, turned into a monster at the end.

Man, everything I’m typing sounds awesome. I’m sure things will pick up after Hugo Strange returns, but for now it feels like a generic-filler monster story that won’t have any impact on the character’s futures. It is entertaining though, so it’s a fun read if nothing else, I just expected more. This had all the ingredients needed to become something special, that just hasn’t been the case for me.

The new Deathstroke series has been one of the biggest surprises to come out of a Rebirth, along with Green Arrow. The majority of reviews have been very positive, and it has been well deserved. The New 52 Deathstroke was so bad that current writer Christopher Priest, wanted no part of it and is completely ignoring it. Scouring the web, I was able to find a few negative comments. Some of which I agree with. There are a few moments where the series tries too hard to be edgy, which is unnecessary because this is the most badass portrayal of Slade Wilson I’ve seen in years. Those gratuitous moments aside, these past four issues have been a joy to read.

In this issue we got our first look a Ravager and she was amazing. Rose Wilson is introduced to us in the middle of stopping a hitman from killing his target. Slade isn’t as impressed as I am with his Nightwing trained daughter, which leads to some entertaining back and forth between the two. This issue kept the momentum of the plot going, while re-introducing us to Rose. Also, the book looks good, I really love the art team they chose to put on this series. What a great new series to launch now that Deathstroke’s feature film debut in the Batman solo film, fast approaches.

I loved this issue of Batgirl. Barbara Gordon went full on detective mode, and it was great to see. Perhaps not so coincidentally, her love interest Kai showed up very little in this issue. Hope Larson seems to be able to write a Batgirl that’s enjoyable for everyone, but the plot has been bogged down by an unnecessary romance. That wasn’t a problem this time around: Fun and interesting plot, fantastic art, and Barbara being Barbara.

I’m going to give this issue a relatively high score but I can’t ignore the most recent announcement: Batgirl will be returning to Burnside to deal with Penguin’s hunk of a son. Also, amazing artist Rafael Albuquerque, will be leaving the book. The new artist looks like he has a similar style to the Birds of Prey artist. This all seems like a negative, but issues like Batgirl #3 give me hope for the future.

The explanation for Wally West not being around is becoming more and more convoluted, but for good reason. It makes sense for him to search out the being responsible for sticking him into the time stream, but he can’t fight Dr. Manhattan(at least until the second Rebirth event). Making Abra Kadabra the one who stuck Wally into the time stream gives him someone to fight. Dr. Manhattan is referenced by Kadabra in the comic so he’s still the main target. So far I have no qualms with the plot, but I’m still iffy on the execution.

I like where Dan Abnett is going with this story. I just wish the dialogue wasn’t so clunky. The part where Wally West goes to check on Linda Park should have been a sweet moment, but the back and forth just came out awkward. So, I have mixed feelings on the writing, but the art is still great. Brett Booth does a great job in team books. 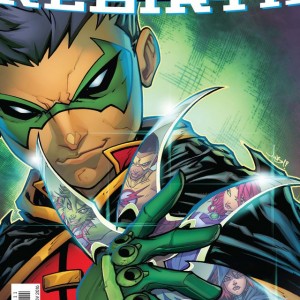 The last time Damian Wayne joined the Teen Titans: Dick Grayson was Batman and forced him to join so he could make friends, Tim Drake was the leader, Damian wasn’t even a teen, and he eventually quit. So as a big fan of this current Robin, I wondered how the team would actually be put together. Turns out Damian Wayne picking off meta humans one by one to create a team is the perfect way to do it. And it makes a fantastic Rebirth issue. The art was so good too–it’s not a manga style but it has a different feel from most of the comics being released.

I’ve been bummed out with the lack of Robin in the Batman comics, but this series appears to be worth the wait. Still waiting on Super Sons, which won’t arrive till 2017 along with a new JLA series.

Dear DC Comics, sign Benjamin Percy and Jonboy Meyers to exclusive contracts and have them write and draw everything. Percy looks like he has another hit on his hands after turning Green Arrow into a must read. Put the man on Super Sons or JLA.

Forget the main story which has been ok, the Katana backup by writer Rob Williams and artist Phillip Tan was great. It was a full on anime/manga and it was glorious. The backup was a retelling of Katana’s origin, which was nice but that art was beautiful. I would not hate a Katana solo series done in that style.

Ok, back to the main story. It was ok, the squad seems to be spinning its wheels at the moment. They’re trying to break Hack out of a secret prison, but they’re being attacked by Zod and now other villains. Harley Quinn is hilarious, which is something I haven’t said about her solo series. I wouldn’t say it’s one of my favorite Rebirth comics, but I am enjoying myself quite a bit. I’m just hoping they really haven’t killed off Captain Boomerang.