Not a lot of Batman comics out this week. Which is easier to review, but I do love me those ten issue weeks. Even with only four Batcomics out, it is a solid week. Monster Men has finally started to pick up and Justice League was weird as hell. In a good way. I even enjoyed Harley Quinn this week. 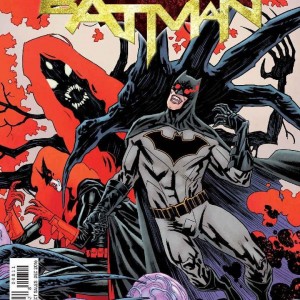 I woke up excited that I will be getting a new Batman comic today, until I saw the cover of the comic book and realized that the Monster Men crossover is still going on. I’ve been disappointed by the first few issues of the story but to my surprise I actually enjoyed the latest release. The issue still centered around Batman and Batwoman teaming up to fight monsters. They have a fun dynamic going on during the heat of battle. Batman really hates receiving help from his fellow heroes and that didn’t exclude Batwoman when she swooped in to catch Batman.

As great as they were, it was Duke who shined in this issue. Batman has been been holding him back since Rebirth, much to the frustration of Duke and the readers. He’s a new character that needs to be built up before we actually care about him, but I have to admit, I was hyped when he finally showed up to save the day. All that teasing paid off, and his costume looked great. It’s the same artist as before but I’ve really taken a liking to Riley Rossmo’s style. Not too much has changed since the previous two issues story wise, but Duke and monster Nightwing were fun additions. I’d be lying if I said that I wasn’t looking forward to the next chapter. 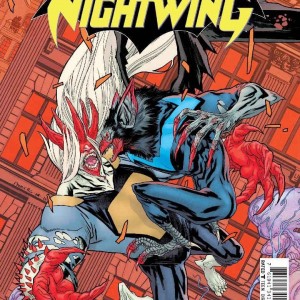 I really wish the Monster Men crossover delved into Hugo Strange’s plan a lot sooner. I said from the beginning that he was the most interesting part of the story, and that remained true in this issue. The first half of the story dealt with Nightwing being changed back, but it was in the second half where it picks up. Grayson breaks down Hugo Strange’s plan and how the monsters are meant as a diagnosis for Batman. Really neat twist and I feel like the final chapter will have a nice payoff because of it. I just won’t be surprised if I’m left wanting more Hugo at the end of it all.

I wasn’t into the art in Nightwing like I was in the Batman issue. It wasn’t horrible by any means, but it’s hard not to compare with all this alternating.

Remember when I complained about the last story arc being all action? Well we got the polar opposite in the new issue of Justice League, and it was fantastic. Last week the Superman title gave us a one off slice of life story with Clark and his family. It was probably my favorite issue, and this JL felt very similar. Except the Justice League weren’t enjoying themselves. They fight off some dark entity that is causing them to panic in fear, then Barry Allen turns into a super douchebro on his date with Jessica Cruz. I very much enjoyed reading this issue. If that wasn’t enough, they tease a Batman and Superman confrontation in the next issue.

At first I wasn’t happy with an ambiguous shadow entity as villain, but so far it’s really thrown a wrench in the relationship between the Justice League. Intriguing start to a new arc, and some really good work by the art team. Screw it, I’m getting my hopes up again for this title. 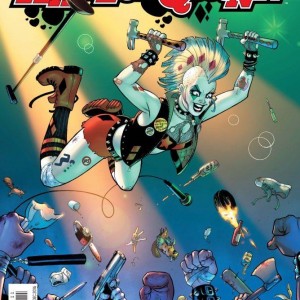 My three big takeaways from this comicbook: Harley looks good with a Mohawk, Red Tool is tittering from parody to flat out Deadpool ripoff, and this series works best with a structured story.

Never thought I could have fun reading this comic. I don’t think everything has to be serious, but this series just wasn’t for me. But I could totally see other people being into it. With that said, I actually thought this issue was pretty good. Harley forming a punk band to get closer to group of robbers was great. Red Tool aside, I’m warming up to the rest of her cast too. The art has always been the saving grace for this book, for me at least. There’s a different artist this time around but it was still quite good.