Another great week for Batman comics.  Before Rebirth of you had told me that Deathstroke would be one of my favorite titles I’d have called you crazy. The Monster Men story finally ends today, it never quite lived up to its potential, but it’s not awful. Scott Snyder still kicking butt on All-Star Batman though.

Scott Snyder is definitely mixing things up with this new Batman series. It doesn’t feel as restrained as his run on the main Batman title, anything goes this time around. Multiple cameos by the dark knight’s rogues, and an oddball story has made All-Star Batman an exciting read. Throw in JRJR”s art and this is already shaping up to be an instant classic. Who’d have thought we’d ever be reading an issue where the KGBeast shows up out of nowhere and interrupts Batman and Two-Face’s road trip to cabin where they met as children?

As much as I like the way the Duke is being brought along across all Batman titles, this backstory which features him, just isn’t doing it for me. It’s very weak, especially compared to the main story which is a total blockbuster movie in comicbook form. I even like Duke’s inclusion to the main story, but reading about him trying to capture Zsasz is making me Zzzzz.

Rating: 9/10 (Perfect score without the backup, it’s a tedious read.)

The penultimate issue of the Monster Men storyline is finally here, and it’s pretty much what I expected. I had my problems with the story and art at times, but by the end I was sold and enjoyed it. Batwoman and Nightwing had a chance to really shine in this crossover. Kate was a leader throughout, and Nightwing did his best impression of the worlds greatest detective. Dick doing detective work is always a great addition to a story, he was taught by Batman himself and it’s rarely shown. The art switched around a lot but I appreciated how different they were to traditional Batman artists.

It wasn’t all great though. Hugo Strange was underutilized, and if it wasn’t for this final issue all we would have got for six chapters was the Batfamily fighting random kaijus. Admittedly that sounds awesome, but they do need a purpose. We did get Hugo’s motivation but it should have been fleshed out more because not everyone knows how obsessed Strange is to Batman. Finally, I’m not sure why they picked this paticular artist to end the crossover but the art was underwhelming for me. Complaints aside, I did have fun reading the Monster Men crossover overall, but I look forward to all titles picking up where they left off. 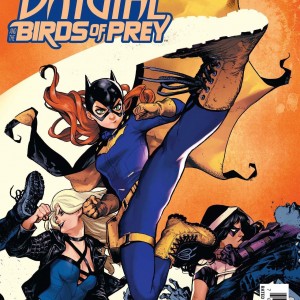 Batgirl And The Birds Of Prey #3

The new Birds of Prey series has started off at a snails pace. Not a lot went on in this issue. They’re still fighting snake people and tracking down the evil Oracle and Fenice. One thing that stood out was Black Canary’s origin. Dinah is shown talking to her mother throughout the flashbacks, despite her mother not actually being there. The foster care scene in particular was sad to see. I love that the characters backgrounds are being established, but I have a feeling that Dinah’s mom might be Oracle.

This was a solid issue thanks in most part to the flashbacks. Sans the ugly looking snake characters, everyone looks great. I like the way Claire Roe draws Huntress. Here’s hoping the Oracle and Fenice storyline finishes quickly because it doesn’t seem like there’s a lot there to enjoy. The potential for this series lies in the main characters, not generic gangsters. I hope all three members get back stories before recruiting new teammates.

I’m really happy I added Deathstroke to the Batman comics we review here. The title was originally added because of the news that Deathstroke will be the main villain in the upcoming Batman movie, also the first two issues were excellent. I thought maybe Batman fans like myself would have incentive to read this, and now they have a little more.

Deathstroke and Rose went to Gotham City to lure out Batman so that he can help. The narration describing in detail what Slade actually thinks of the dark knight was such a great read. Both come off looking like paranoid psychopaths, it’s fantastic. Batman using Robin to check things out was indeed cold blooded. In Rebirth: Ravager and Robin never met, even though pre-New 52 Rose and Damian Wayne struck up a friendship in Teen Titans. Slade kidnapping Damian to get Bruce’s help for protecting Rose is just perfect.

I can’t ask for a better Deathstroke series, the father-daughter stuff is hilarious. Having Batman and Robing join the fun for however many issues is the cherry on top. Fun story and really good art. Joe Bennett is someone I need to keep an eye on, because I didn’t know who he was going into the series. Red Hood And The Outlaws #3

With so many different versions of Bizzaro it’s hard to keep track of which one is starring in this comicbook. Jason Todd is still pretending to work for the Black Mask, he’s also reaching out to Bizarro. He feels a kinship with the Superman clone. Artemis is biding her time in her prison cell, waiting to get information out of Black Mask. This is a really fun comic, I can’t wait for the three of them to work together. I already like this team more than the Red Hood, Arsenal, and Starfire teamup.

Scott Lobdell is winning me over and Dexter Soy is a future star. He’s going to be put on a big book within the year, count on it. His art is amazing. It reminds me of the Batman one shot that Jason Fabok did, you knew he was going to blow up. Shame Fabok doesn’t want to do monthlies anymore, but maybe now Dexter Soy can step up.

General Zod probably should have slaughtered every member of Task Force X. But they did wind up defeating him in a believable way, by not beating him and sending him back to the Phantom Zone. The story is moving along nicely, we finally know that there is a mysterious person or persons out there stealing/stockpiling weapons and metas. If anything the story is going a little too fast. Also it looks like Boomerang is indeed dead, bad move in my opinion.

I love Jim Lee’s art but the backup story was gorgeous. I shouldn’t have been surprised to see Gary Frank’s name in the credits. The backup is a little story about how Harley Quinn earned the trust of Rick Flagg. It features the Joker and they all look amazing, I’ll add an example at the bottom. Overall it’s a solid story and some phenomenal art.